Argentina lost the match 4-2 in penalty kicks to Chile after playing more than 100 minutes of scoreless soccer in the final at MetLife Stadium. Messi took one of the Argentina penalty tries, shooting high over the net. Visibly emotionally distraught afterward, Messi broke the news that he was walking away from the national squad. 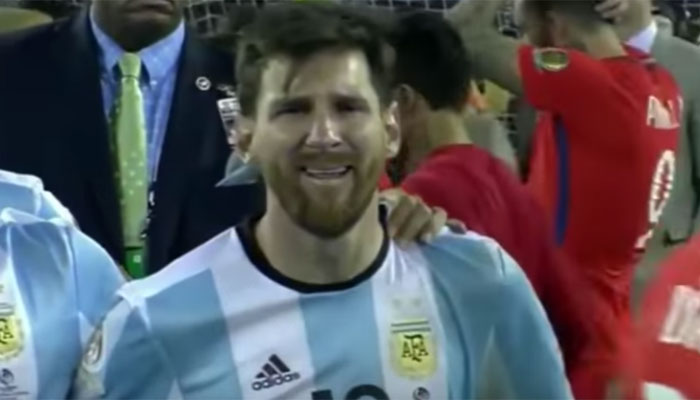 “My thinking right now and thinking about it in the locker room, I’m done playing with the national team,” he said.

When asked if he was retiring, the 29-year-old Messi replied, “I tried my hardest. It’s been four finals, and I was not able to win. I tried everything possible. It hurts me more than anyone, but it is evident that this is not for me. I want more than anyone to win a title with the national team, but unfortunately, it did not happen.”

It was the second straight year Argentina lost to Chile in the Copa America final. In total, Messi lost three Copa America finals and the 2014 World Cup final while representing his native nation. He was asked if he would ever again pull the signature Argentinian blue over his head.

“I don’t think so,” he said. “I’ve thought about it. Like I said earlier, I tried everything possible to win. And that’s it. It’s four finals lost.”
Making his intentions known publicly, the speculation will now run rampant as to who will follow Messi out the door. Sources have said to Examiner.com that Sergio Aguero, Javier Mascherano and Lucas Biglia are additionally planning to retire. Ever Banega, Ezequiel Lavezzi, Angel Di Maria and Gonzalo Higuain are also considering retirement, according to multiple reports.

“Some of us are evaluating not playing for the national team anymore,” Aguero told reporters after the match.

Messi debuted for the Argentina national team in 2005, and has since proceeded to become the program’s most prolific scorer in its history ‘ Messi has scored 55 goals in 113 appearances.

Just ahead of the final, Messi publicly scrutinized the Argentine football federation (AFA) and revealed during a press conference that he had a backlog of complaints lodged against the AFA that had yet to be addressed. He called the AFA a “disaster” after the national team’s plane from Houston was delayed on Thursday.

From his Instagram account, Messi wrote, “Once again waiting on a plane to leave for our destination,” adding “What a disaster the AFA are. My god!”

The AFA later said the delay was because of weather issues.

Goalkeeper Sergio Romero thinks his teammate might have been speaking emotionally in the heat of the moment.

“I think that Leo spoke in the heat of the moment because a good opportunity passed us by,” Romero said.

Aguero offered his opinion on the situation, saying Messi was likely feeling the brunt of the pressure since he’s the team’s leader and missed the penalty kick.

“Lamentably, the most feed up is Leo, because of the penalty,” Aguero said. “It’s the worst I’ve seen him in the dressing room.”

Manager Gerardo Martino, who had yet to be broken the news of Messi’s retirement when he spoke with the press after the game, urged all of his players to stick with the AFA, despite the match result and whatever beefs they may have lodged with the organization.

“My impression is that they don’t have any reason not to continue,” Martino said. “We’re in the middle of a very difficult World Cup qualification, which will continue in September. Besides, they’ve done well. They don’t have too much to scold themselves over.

“Regarding the political situation, there’s not much to say. It’s the same situation that’s been going on for the last six months. The result doesn’t change our view of these past six months or the problems that may have arisen.”

“There is a political matter here that has to do with those in charge of the destiny of Argentine football at the moment and those who aspire to do so,” Martino continued. “None of this has had any impact on us or can be used as an excuse, because we reached the final, and we should’ve won it.

“[Messi] is the way any footballer must be when he gets to the final and then loses. Certainly, to lose again is too painful to assume a posture that’s any different than that, either on the field or in the dressing room.”